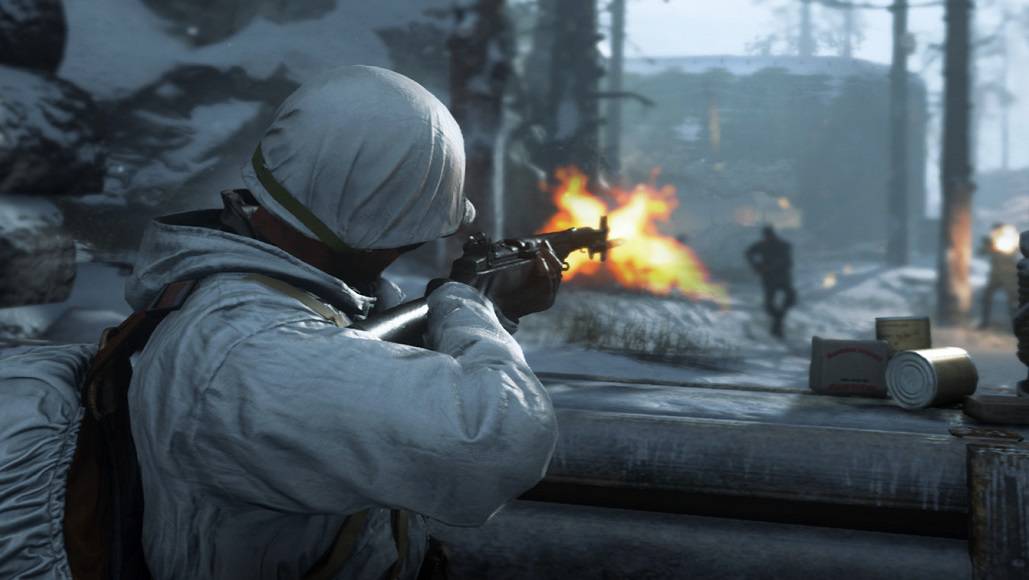 Sitting In The back of a truck as part of a convoy rolling into a North African seaside town, I'm mentally cataloguing the reasons I enjoyed the original Call Of Duty so much. To be honest, I'm struggling. Not because it wasn't a fundamentally amazing game, but because it isn't really like other games where you wistfully recall neat set-pieces and snatches of dialogue. Call of Duty boiled down to raw emotions: fear, adrenaline, tension, catharsis. It's hard to conjure these feelings up when you're peacefully rolling through the desert.

Two minutes later, I'm cowering behind an upended cart, gunfire perforating my eardrums, and watching my comrades being cut into pieces all around me. And there I stay, I simply don't want to move -despite my superiors screaming, 'Flank! Flank! and ever escalating chaos. When I do move I'm killed without ceremony, andwithout compassion. So I sit back in my chair, and slowly mouth the words 'Oh. Oh yeah. And it all comes flooding back. 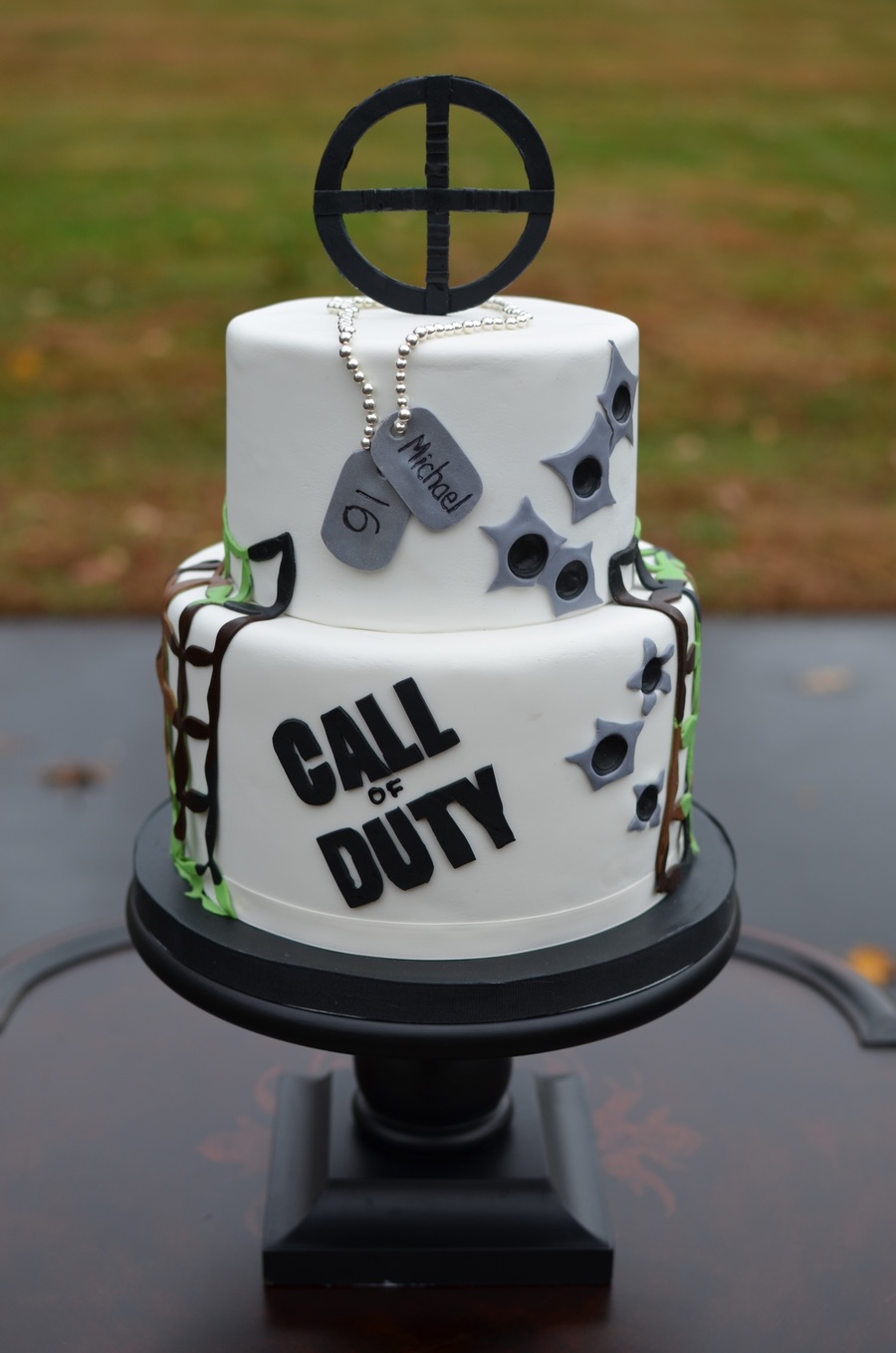 One of the many triumphs of Call Of Duty (silly traipsing around manor houses and dams aside) was that everything felt real. Call of Duty 2 kicks this up more than a few notches. A farmhouse feels like a farmhouse, a beach feels like a beach, a battle raging through a town feels like a true 360-degree panorama of hell. Any other game would have a gaggle of Nazis mooching around at the end of a corridor -but here you can never tell where the boundaries of a map begin or end - you may as well be standing in real smouldering ruins in real locations. More than ever COD2 sees Infinity Ward throwing the veil of faux-non-linearity over their levels - with different pathways, realistic street networks and gameplay that refuses to be relentlessly forwardpushing - often backtracking or having you pinned down in specific areas. It works wonderfully, and when I played through the fiendishly hard Pointe Du Hoc beach landing and cliff climbing level, I must have careered over it at least five times in markedly different ways before finally made it across - taking detours through bunkers, collapsing tunnels, gun emplacements, bomb holes, trenches and around ragdoll Germans doing backflips. Not daring to stick my ahead above ground level once, this game is merciless, and far more so than the last offering.

Adding to the increased feeling of realism is the Al. And don't worry, this time I'm not going to launch into another F.E.A.R. and Far Cry 'and then they flanked me and I was all like 1111! This game ROxxors!' tirade. Although, then again, there was a moment in the Russian campaign in which four Nazis did push forward down the opposite side of the street while I was otherwise occupied, unhurriedly chucking a grenade as they did so, at which point that was exactly what I said.

Keep It Up Lads

The Al of COD2 propels it above and beyond its predecessor since it brings a real feeling of organic battle - the activity of friend and foe alike don't need to be scripted anymore. Away from the scampering down side-streets and the more intuitive ways that Allies use cover, this means that there are far fewer moments in which everyone stands around waiting for you to cross an invisible marker and even, miracle of miracles, enemies that get shot by a hand other than your own. Many a time I found myself standing in the open without hope or cover, in front of a German with a raised gun - only to be saved at the last second by a blast from a friend hiding behind a nearby barrel. This, however, works both ways. The move away from having your British/Yank/Ruskie soldiers performing progress-requiring scripted manoeuvres means that whereas many were oddly invulnerable before, only getting shot in the head when level flow demanded it, now they're prime fodder for the Nazi guns. With more and more comrades tumbling around you the longer you leave a machine-gun post on the opposite side of a Libyan marketplace manned by the enemy, the more Call Of Duty intensity goes through the roof. When you tot in the restrained, yet still spectacular, ragdolls - even more so.

While we're on the Al though, I ought to highlight a slight concern that may hinder what I consider to be COD2's unstoppable rise to greatness - the much vaunted battle chatter system. In its more mundane parts, it works and works well -if a little over-reliant in the North African chapters on having Cockneys shouting stuff like 'Die you dirty Jerry-rotter!'. A f**k or two would have been nice.

But I digress. While fighting through a Russian city mission, itself a work of wonder, and attempting to reassemble a broken communications cable, my comrades were getting extremely twitchy. 'Over there!' they cried - although I was cowering beneath an exposed desk and couldn't see them pointing. 'By that broken wall!' they shouted - even though we were in a ruined city and all the walls were broken. 'They're coming from the East!' they screamed - even though I wouldn't know which way East was if I was standing on a beach in Eastbourne. Perhaps when playing through completed code I'll start to learn the way the chatter relates to gameplay a bit more - maybe then it'll convince me. But until then the jury is sitting in another room and eating sandwiches, paid for by you, the tax-payer.

But let's have a poke around this Russian level I'm outlining, as it's pretty special. The helpless feeling of being ill-equipped and, indeed, unarmed that COD nailed so hard in the opening Russian chapters certainly wasn't on show in the level that I played -if anything, the game encourages you to swap between friendly and enemy weapons far more than either its progenitor or its pro-progenitor Medal of Honor: Allied Assault. Then again, there's more chaos and thereby more bullets needed to deal with it - at least in the chunk of warfare 1 played.

At the start you're doing stuff like creeping into what in pre-war would have been the basement of a gutted house, and looking up at three outcrops of what were once floors, each packed with Nazis. It becomes clear that Infinity Ward has taken its established melding of war-torn images and iconography with level design on a few more paces than its last tour of duty. Moving on though, despite suffering heavy losses, myself being the culprit of an accidental friendly kill on more than one occasion, we pushed the enemy back far enough to restore the communications line - and the word was given to take sticky bombs and return to the scene of my earlier hiding-under-a-desk escapade, to deal with patrolling tanks that had cut in behind our advance.

Crouching behind scenery, running, ducking and throwing smoke grenades to mask my progress, I made it back. Sneaking up behind a big metal thing (I'm not going to pretend I know what kind of tank it was - it was German and had guns on it), I attached my explosives to its tracks. And this is where it was hammered home to me, even more than my initial North African scrambles of shit-pantery, why I'm set to adore COD2. Other games would lie content to say, 'Wow. There goes the tank in a big explosion. Level over. Have a banana. And a medal. But that's not enough for Infinity Ward. No, the tank is still just as dangerous as it ever was. Its tracks blown off, it still nigh-on pulverised me as I scampered from the scene, and while it was merrily spraying the desolate block of flats I took cover behind, it was only when I nudged myself very slightly around a comer that I saw two Allies sprinting up to it, leaping on top, wrenching open its lid (Will, tanks don't have lids - Ed) and chucking a grenade in - the ensuing explosion killing one of the poor Ruskies as he ran away. Scripted yes, genius also.

It's not just this, though. The levels of C0D2 that I played were permeated by wonderful little touches of profound texture that lie far deeper than its predecessor - women fighting for the Russian resistance, German commandants letting off feeble blasts with a pistol in their dying breaths, propaganda leeching out of Nazi loudspeakers. Most notably, though, in the earlier stages of the D-Day level, I noticed that a victim of one of my grenades was a little pudgy around the edges - fat even. Why was this Nazi overweight? Why did he have a beard? Because the year is 1944, and the Nazis - experiencing heavy, heavy losses on the Eastern front - are conscripting anyone regardless of shape, experience or ability. As I crouched there, the reality of the situation danced across my thoughts - asking myself exactly why an overweight and unwilling conscript was positioned so near the front-line, and thinking about the processes that had led this middle-aged butcher/baker/ Qindlestick maker from some unspecified small town in Germany to meet an undignified end in a muddy trench in Normandy. And then I stood up, was hit by mortar fire fired from a faraway place, and collapsed in a pile next to him. And that's pretty much why I love Call Of Duty 2.